You know when you have a nugget of an idea and you share it with someone and then they run with it and then you find yourself racing around town trying to win a book challenge. Yeah? Me too.

On a play date with our buddies from Giftsfromthepirates I mentioned that it would be fun to do a charity shop book challenge where we see who can get the best selection of children's literature. Pauly loved the idea and it was game on.


The morning arrived and I was pumped. I was more than match ready. I excitedly told Matt what the day had in store but then my team mate stuck the boot it with 'there isn't any room for more books on my shelf.' Whilst this is almost true I felt deflated. I had to have a good changing room talk with him about how you can NEVER EVER have too many books. Only when he had agreed to give 110% (intensely dislike that phrase) did we head off to whoop the pirates.


We started the day on friendly terms with a group trip to the library. It is an inspiring building- at least from the outside- and we hoped it would set the tone for our book day. Matt asked if the man on the chair was a story teller. I love how he came up with that idea but no, son, that's Charles Darwin. The Other Parent tells me he built the local shopping centre or somet. 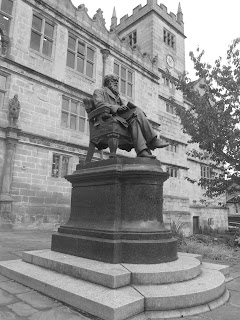 The library was hosting a session for little ones so we grabbed some books and took our notsolittleones to sit in the teen section. The books there looked a little more adult than the Judy Blumes I was happy to read back in the day. The boys were only interested in their haul though.

Pauly kicked things off by reading a couple of stories. 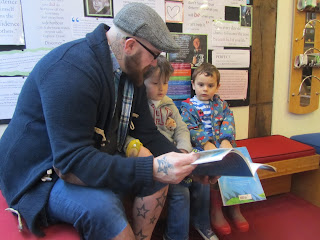 An odd lady with wild hair read another.

The boys started sniffing around for food so we had to leave the library.

I cannot advocate eating in the library (we shall ignore the 1996-1999 period of my life when I regularly consumed purple Nik-Naks in the basement of the Brotherton Library in Leeds. Lunch I think it was called back then) so we sat outside by Darwin. Whilst the boys snacked us grown ups discussed the precious rules for the competition:

£5 to spend.
No shoplifting
No fighting
No books from home- I possibly accused the other team of this, oops.

We had to see what books we could find for our budget and choose one as a gift for the opposing team.

And then suddenly we were under starter orders...

Matt and I headed for Oxfam Books. I thought this was a stealth move. I was delighted to find a Christmas section and immediately snatched up Tolkien's Letters from Father Christmas and How The Grinch Stole Christmas. I was just sizing up the children's section when Matt announced that he needed a wee. I quickly paid and we took a time out. We found the loos just in time but not before we had walked in on a lady who evidently had not locked her door. We shook off that experience and got back in the game.

I tried to keep it fun for Matt but the five minutes of timewasting had made me sweat a little. We headed to another charity shop and Matt spied a dinosaur. It was not a book and it walked and roared. I was stuck in a deep dark moral quandary and caved immediately. He did have £2 in his pocket to spend on something he found he absolutely must have. I was contractually obliged to purchase it and I figured it would boost team morale. I was just peeved that it was not something smaller or quieter. He promised it would encourage him to keep his mind on the game so off we went to the next shop. 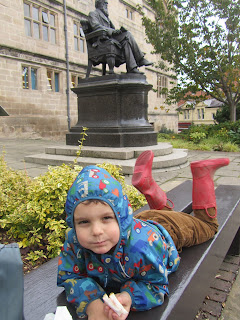 The plan was to meet back up at twelve for lunch and to be joined by our pals Lucie and Martha who were to be our adjudicators. Pauly tried to steal another 30 mins but nothing gets in the way of our lunch time. Nothing.


Holding back our trove, we both declared that still had a pound or so left so we headed off for round two. We found a shop with books as cheap as 10p so I spent the rest of my money there. Lucie got stung for a Tiger book that cost a pound and ran out of battery within the hour. My lowest point was finding an Olivia book and having no money left. It still hurts now.

I turned my frown upside down when we met back up at the cafe in the Museum.

We played at reindeer whilst we awaited our hot chocolates. See an emerging Christmas theme developing? 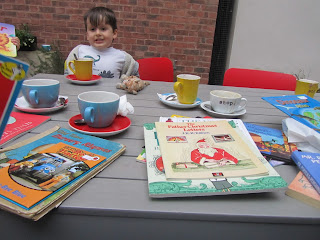 We gifted the Dinosaur Atlas and Mr Popper's Penguins to the pirates. They gifted us with Dahl's adult book Skin and the old annual. The annual was our gift because I had been saying how I love books with character. I do like seeing the traces in a book left by other people before me (a name, a message, not so much hair or stains). This book had Helen Partington's name, writing, colouring, and pages coming out. A real character indeed.

We all enjoyed ourselves but then the inevitable question of who won reared its ugly head.

We all looked to the judges. Lucie deferred to Martha who undiplomatically granted the others the win. I called for a steward's inquiry seeing as the refs accepted the bribe of an Oliver Jeffer's book. 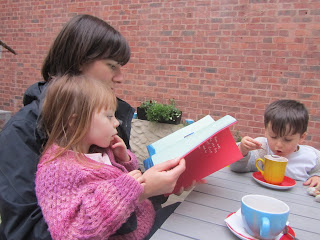 I held my breath waiting for Matt to loudly express his disappointment at losing. But in a last minute shocker Matt declared that we were all winners! And a few moments later, when Opeie told Matt that you don't get extra points for stepping on the lines on the pavement but you actually get lasered, Matt shocked me again. He uttered some words I had not yet heard in four years: 'ok, we'll try it your way'. Now, that is being a good sport. And that, my friends, is a result. 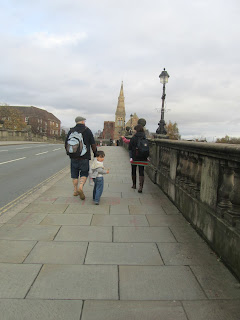 If anyone knows a Helen Partington (or nee Partington) possibly of Shrewsbury, please tell her not to be so rigorous with her books although we have very much enjoyed her penmanship. If she would like to be reunited with her nursery rhyme annual please get in touch (with £1, some sellotape, and proof of handwriting).

Pleasez excusez some of the book links- some publishers no longer hosted details for said books and I could not trace the publishing details of others. Judge me not harshly. I tried as much as I could be bothered for this time of night. 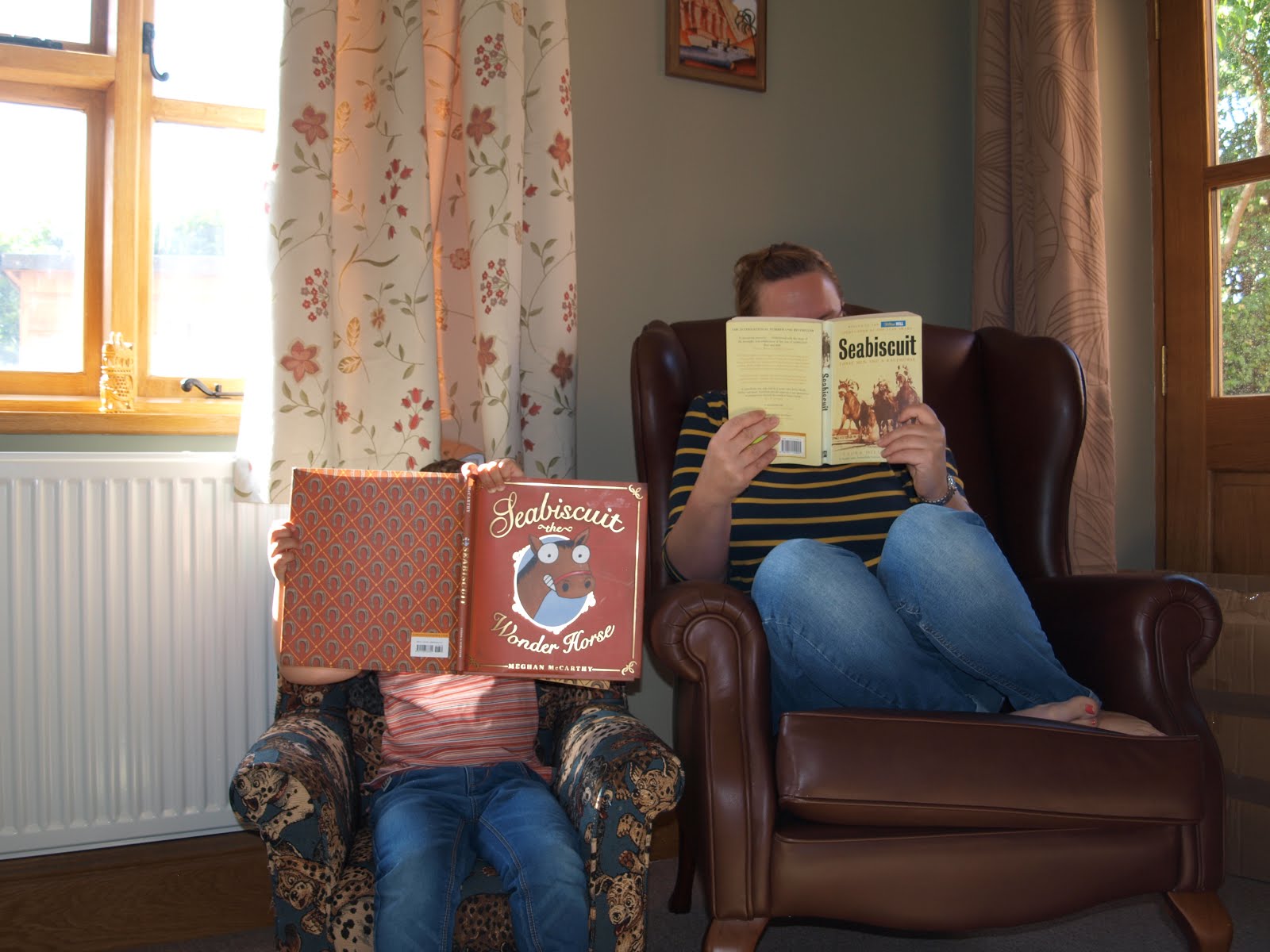